You are here: Tour1 / Heroes

In the “APIS” region that is found near the administrative limits of Tala and Kissonerga and on the 7th of March 1957, Miltiades Stylianou from Tala and Christos Kkelis from Kissonerga heroically died in combat during the struggle of E.O.K.A. for liberation (1955 – 1959).

A modest monument was built in memory of these two heroes of the Cypriots’ struggle for freedom. 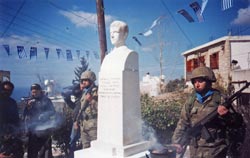 Miltiades Stylianou (curriculum vitae)
Miltiades Stylianou was born in Tala on the 17/6/1937 in a farming family. He was the first out of the family’s seven children. He graduated from the village’s elementary school and then studied in the Liasideio Middle School of his district.
He was one of the first to become a member of the Liberating Organisation E.O.K.A. and pretty soon he was Christos Kkelis’s right hand.
In 1956 he left high school so as to better serve the organisation. He was the loyal companion and the regional contact of Christos Kkelis. He was always next to Kkeli in ambushes, relocations, in supplying the guerrillas, and he was the spotter of his region.
On the 7th of March, 1957, while he was in the APPI region between Tala and Kissonerga along with Christos Kkelis, the British occupation troops -after receiving information from traitors -trapped them in their own hideout. At the call of the English soldiers to surrender Miltiades replied with the “Molon Lave” (famous phrase of ancient Greek hero Leonidas against the Persians when they asked him to surrender his weapons, meaning “come and get them”). In the battle that ensued, Miltiades Stylianou and Christos Kkelis fell and thus joined the honourable list of heroes and martyrs of Cyprus’s freedom.

Christos Miltiadous Kkelis (curriculum vitae)
Christos Kkelis was born in Kissonerga in 1934. He graduated from the elementary school of his village.
He was among the first to join the liberating organisation of E.O.K.A. Early on he gained the trust of the organisation’s leader and he placed him as the sector’s head. He participated in many ambushes and operations against the English.
An audacious and heroic operation of his was the placement of time-bombs in the military restaurant of the -then -English camp during an officers’ reception.
A wanted man and trying to avoid being arrested by the English who learned about his activity, he became a guerrilla fighter in the mountains.
After being betrayed, he was trapped along with his comrade, Miltiades Stylianou, in their APPI region hideout. After a harsh battle he was killed and so he also joined the heroes’ pantheon of Cyprus’s freedom. 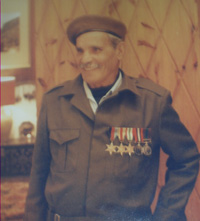 He was born in May 1914 in the village of Koili in Paphos district. He moved to the village of Tala at the age of 16 and got married to Maria. They had five children.

He joined the English Army as a mercenary so as to raise his family. He took part in many battles and narrated many of the events he experienced to his family. While unfolding war stories, he mentioned Alelamei-Masapatou-Kasino-Korytsa.

During the battle in Korytsa, his team was separated and the survivors left for the mountains. Savvas, along with a co-fighter were wandering lost for days, without any food. They took fruits from the trees until they met a farmer. They worked for him and earned a piece of bread. Savvas actually mentioned that “he worked as a servant in a plot because that was the only way to survive”.

Difficulty and exigencies did not stop for Savvas. When the Germans entered Korytsa, he was kept captive and was led to a concentration camp.

His family did not hear from him for three years and they thought he was dead.

When the war ended, with the help of the Red Cross, Savvas was located at the concentration camp. His relatives were then notified.

It is worth mentioning that he was honored by the English government in 1985.

OTHER FIGHTERS OF WAR WOLRD II’: 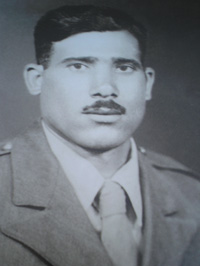